Dismantling The Illusion Of Separateness 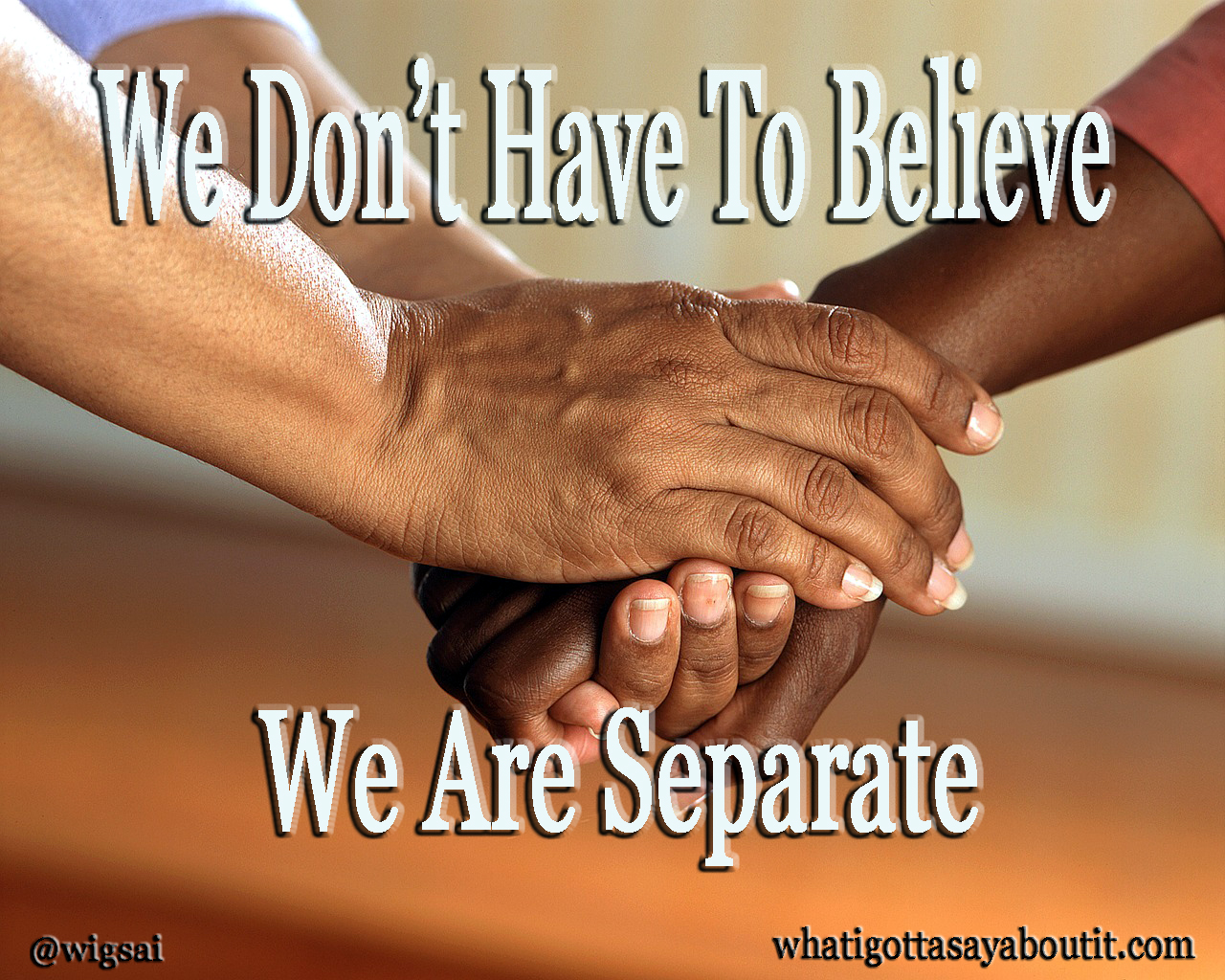 Here is the sixth prompt for the Live your Legend Writing Challenge.

Okay, here we go!  I want to talk about how we can change the illusion of separateness.

For much of my life, I lived a life that was basically unexamined. I had a core belief, like most people, that things in life happen “to you’ and you just have to cope with them.

This is not necessarily true. Sure, some things occur in life and you have to deal with them. But, you also have to take responsibility for your life.

Today, my mindset is different. I have come to realize that life doesn’t happen “to you” it happens “through you.” I understand that you have to be the creator of your life or you will forever be like a lone ship lost at sea. Now that I am aware of this I want to make a difference in the world.

Dismantling The Illusion Of Separateness

The difference I want to make is to help bring clarity to people’s lives. To do this I suggest that people must first question everything they think they know. Afterward, I suggest they start replacing any limiting thought patterns. Finally, I urge them to take action.

This process will help people discover who they really are and what they have to offer the world. As more people become aware, the illusion of separateness will be dismantled and the world will be a much better place.

Why Do You Believe That?

“The unexamined life is not worth living” – Socrates

As I have already mentioned, I’ve lived much of my life unexamined. I didn’t question anything, at least not deep enough to find the answers.

Eventually, I started to examine why I believed some of the things I believed. I did some research on belief systems and discovered that they are basically a form of a habit.

A Habit is a Routine That if Repeated Regularly will Occur Unconsciously.

We have these things in our subconscious mind called neural pathways. These neural pathways are formed by repetitious thoughts. That’s exactly the same way a habit is formed. Do anything long enough and you form a habit, or, a belief.

The only problem is that most of the stuff we repeatedly think were fed to us from our family or other authority figures. We also get fed a load of beliefs from our cultures and traditions.

“We are so conditioned, so heavily burdened with belief, with tradition, with the past, that this actually prevents us from seeing or listening.” – J Krishnamurti

Have you ever heard the story about these women in a family where they always cut their roasts in half prior to roasting?

The third generation daughter said she did it because she understood that it made the meat more tender.

Her mother said that she learned it from her own mom and thought it was to reduce the cooking time and save on energy usage.

When the oldest woman, grandma, was asked about it, she said that the oven she had when raising a family was very small and it was necessary to always cut the roast in half to fit it in!

This story shows how easy it is to form a belief on misconceptions or hearsay.

It’s like the telephone game we played in grade school.

It’s good practice to examine your life and question what you believe and then replace these false beliefs with the truth.

How can this be done?

Related Article: Be The Observer

“Be Impeccable With Your Word. Speak with integrity. Say only what you mean. Avoid using the word to speak against yourself…” – Don Miguel Ruiz

Words have the ability to build something up or to destroy it.

It is estimated that the average person has up to 70,000 thoughts a day. Also, for most people 80% of these thoughts are subconscious negative thoughts.

In the process of questioning your beliefs, you will undoubtedly uncover a lot of this negative self-talk. You might realize that you often call yourself stupid, ugly, or many other degrading words.

While it’s good that we recognize this negative self talk, tt doesn’t help to just be aware of it.  We have to go further and take another step in the process.

You have to replace those thoughts with a positive uplifting alternative.

One way to do this is with affirmations.

Affirmations are positive phrases you repeat to yourself that describe how you want to be.

At first, these phrases may not be true, but with repetition they will sink into your subconscious mind and you will start to believe them. Eventually, they become a self-fulfilling prophecy and actually become true.

Read more on this topic

Once you start changing the way you think about yourself and the world around you, you will have to test things out.

You can read all you want. Believe in any dream. Get on your knees and pray to the Gods. You can have the faith of Job.

But, if you do not act on anything you’ve read or learned, you ain’t changing nothing.

The only way to actually know something is to experience it first hand. You have to test it out for yourself.

Of course, you don’t have to go it alone. Look at other people who were once in your situation and experiment with the ways they have achieved success. If you are able, ask them questions. That’s what we’re supposed to do, help each other out.  This is how we will end illusion of separateness.

The old way of thinking has been about consumption and the survival of the fittest. It has been a “mine, mine, mine” way of life. There’s a disregard for anything or anyone else.  The individuals needs is where the importance is placed.

When this happens in the body there’s a name for it. It’s called cancer

This way of thinking has caused an imbalance on the earth. We’ve destroyed rain forest, polluted our air, and caused disastrous climate changes. All because we have forgotten that the earth is ONE system.

Likewise, the connection between the human race has suffered under the old way of thinking. Kindness to a fellow human being is seen as a rare thing. When it is given, it is received with trepidation. We too have forgotten that we are all ONE.

Bit by bit people are waking up and the paradigm is shifting. People are realizing that we do not have to work for large corporations in mundane careers that do not serve the greater good of all.

People are reaching out their hands to their fellow man and woman, showing them the way to a better world where we don’t have to believe we are separate and alone.

In what ways are you dismantling the illusion of separateness ?

Let me know about it in the comments below.

I’d love to hear what you gotta say!