Where The Pavement Became Dirt

In response to the Daily Prompt –Everything Changes

Walking down the street, you encounter a folded piece of paper on the sidewalk. You pick it up and read it and immediately, your life has changed. Describe this experience.

Well, my story dose not happen on the sidewalk, and it might be a little long.  But, I had fun imagining it up anyways.  I hope you enjoy.

It was one of those days.  You know the kind, you wake up in the morning and the monkey mind chatter just goes on and on.  When will this happen?  How will I be able to do that?  I’m too fat, I need to lose weight.  What does my future hold?  I need more money.  What’s my purpose here on earth?

Then suddenly, I heard an inner voice.  STOP!!  You need to meditate.  You need to be in the silence.  So, I went to my backyard and started to focus on my surroundings.  The sky was beautiful and clear and the sun was radiating vibrant rays. The birds were singing loudly in the treetops and there was a nice breeze flowing. Through the corner of my eye, I saw two squirrels playing. Or, perhaps they were fighting. It didn’t matter. It brought me joy. I took a deep breath and I felt the Qi flow through my body.  I stood there, in that moment for a little while, breathing and directing the Qi outward.  Everything became calmer and the monkey mind chatter subsided.  I was reminded to keep the faith.  Everything can change in the blink of an eye.

I love my backyard. I can never tire of seeing the wildlife and nature. But, that day, I decided I wanted more. I ended up making my way to a local nature preserve.  I had my Hydro Flask filled with water in case it got too hot. But, the weather was remarkably cool and I doubted I would need it. I chose which path I wanted to venture on and began my journey. The sky quickly got covered by the canopy of trees. It was almost as if I were in a different place all together. It seemed darker and more mysterious. 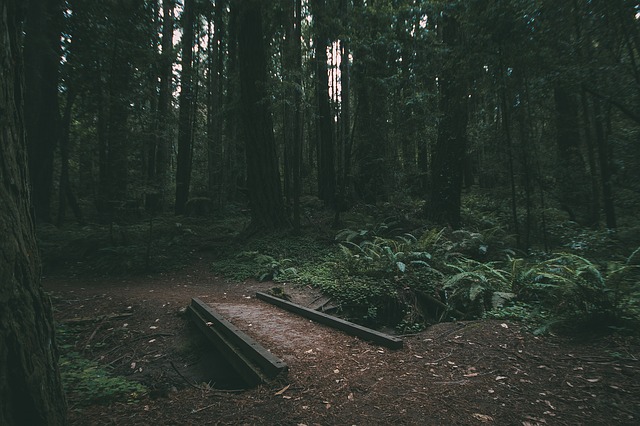 As it often happens in cases like this, my personality changed.  I became a child again.  I began acting as if I were an explorer on some ancient trek.  I immediately picked up a fallen limb, one of the majestic trees had shed, and used it as sword.  However, I didn’t swing it at any imagined enemies.  Instead, I used it to remove the large webs the banana spiders made which blocked my passage.  I also used it to poke at the many things I discovered.

I saw spiders, rabbits, snakes, and many other little critters.  I also witnessed footprints that led off into the thickness of the forest.  One set of footprints seemed as if they were made by more than one critter.  In fact, it seemed like there were many, in a group.  I decided I wanted to investigate further.  My sword now began swatting at the brush, as my journey took me off the path I was on.

The environment changed once again.  The air became thicker and moist.  Soon, I was smacking at my own skin, as mosquitoes claimed me as their meal.  The buzzing sound of flies caught my attention, to the point of becoming an annoyance.  I began to get tired and thought of turning back.  The sound of something rustling ahead of me made me change my mind.  I forged forward, determined to discover the group that teased me with the evidence of their passage.

I went on and on.  Often, hearing other things scurrying around me.  But, the group I was tracking was consistent.  I came upon a clearing, certain I would see them.  To my surprise, they were not there.  Disappointed and tired, I sat down.  While in my Native American position, I heard the bushes move.  As I turned to look, out came six baby pigs.  Oh, how cute, I thought to myself.  But, why are there baby pigs out here, and where is their mother.  Then, it dawn on me.  These are not pigs.  They are wild boar.  Wild boar!!  I thought to myself.  Holy shit!!  Momma boar are very protective.  No sooner than those thoughts flew into my mind, did I see momma boar exit the bushes.  Run!!

I ran back into the thicket, from which I came.  Or, at least I thought I had.  When I was sure I was safe, I stopped my hurried pace.  I looked around and realized I had no idea where I was.  I wandered around, trying to gather my bearings.  Hey, that tree looks familiar.  Nah, it looks just like that one.  Anxiety started to well up inside of me, and so did the monkey mind chatter.  Oh my God!  I gotta get out of here.  I have things to do.  What if it gets dark?  I’ll never find my way out.  I’ll be devoured in the darkness.

My irrational thoughts were interrupted by the sound of movement behind me.  I thought, Oh boy, I’ve been caught.  When I turned around, I didn’t see momma boar.  Instead, I saw a white bunny.  He was panting and didn’t look too good.  Something told me he was thirsty.  So, I took my Hydro Flask and poured some water into the cupped palm of my hand.  I approached mister bunny, expecting him to run.  However, not only, didn’t he run, he allowed me to stoop down and give him a drink.  After filling my palm several times, he allowed me to pet him.  Wow, this is way cool, I thought to myself.  Then suddenly, mister bunny jumped up and ran.  He didn’t run far though.  He stopped about ten feet in front of me.  I thought, he wants me to follow him.  So, I ran towards him and he took off again.  He kept a pace that was easy for me to follow and even waited if I grew tired.

Eventually, I was led back to the dirt path.  By that time, I was the one panting and thirsty.  I sat down, relieved to be safe, and mister bunny and I shared the remaining water.  We also shared something I can’t explain.  We looked into each others eyes and I felt as if something changed.  At that very moment, mister bunny ran and dived into a pile of leaves.  That was it.  There was no more movement.  So, I got up and went to investigate the pile.  I took my trusty old sword and shuffled the leaves around.  To my surprise, I discovered what must have been his burrow.  Laying at the entrance of his burrow, was a folded up piece of paper.  I picked up and unfolded this piece of paper, and found something that changed my life forever.

Fast forward.  It is now several months later.  My financial worries are a thing of the past.  I’ve been getting medical treatment that has alleviated all my back problems.  I’ve purchased a wonderful property that fits my needs.  It has a huge backyard with lots of little critters.  I am involved in many altruistic causes that I have always wanted to participate in.  My life is everything I ever wanted it to be and it all began with that folded up piece of paper.

So what was that folded up piece of paper anyway?  Well, it turned out to be a winning lottery ticket.  That’s right, when I unfolded that piece of paper, I was the holder of a Mega Millions lottery ticket.  When I went to check if it was worth anything, I found out that I won 208 million dollars.  I immediately remembered what I had thought in my backyard on that day when my monkey mind chatter got the best of me.  Keep the faith, everything can change in the blink of an eye.

There’s one thing I didn’t mention.  I also donated a substantial amount of money to the nature preserve where I was led to the ticket.  Why?  Well, because that place helped me to focus on the present moment.  It helped me to remember that life is about the journey, not the destination.  On that day, I was fully immersed in my adventure.  I was no longer a middle aged man with an injured back.  I was a young explorer, willing to seek out the things that caught my interest.  I didn’t have a care in the world.  On that day, the cares of the world were left where the pavement became dirt.