Sitting On The Throne 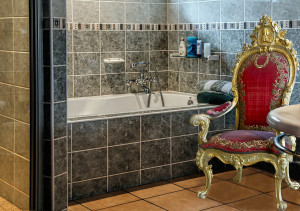 In response to The Daily Post’s writing prompt: “Blogger in a Strange Land.”

What’s the strangest place from which you’ve posted to your blog? When was the last time you were out and about, and suddenly thought, “I need to write about this!”?

One of the most important things I’ve ever learned in my life has been a blessing and a curse.  It has caused me to want to document different things at different places.

At a very young age I had visions and was often disturbed in my sleep by what I thought were my dreams.  On almost every report card, from grade school, my teachers wrote “he is very bright, but he tends to drift off and daydreams.”

In the early years of my self-discovery I had to come to terms with my sexuality. I would go out clubbing and/or to the bars looking for love.  However, most of the times, I would end up in a counseling session with the people I met.  During the whole courting process, or as I like to call it, the cat and mouse play, I would hear voices telling me that’s a lie.  The real truth is this or the real truth is that.  With this information, that was whispered into my ears, I would confront these people.  It would strike a nerve or trigger something in them that shifted the energy from the cat and mouse play to something deeper.  Or, they would simply get up and leave, probably thinking to themselves, what an asshole.

Other things that disturbed me were things like absorbing the energy of the people in a crowd or having a nagging feeling to go somewhere or do something.  I was also freaked out about thinking about a particular thing (in one of my daydreams) and then seeing it come into fruition afterwards.

These sorts of things really bugged me and I really didn’t have anyone to talk to about them.  So, I began a journey to help me understand.  My ultimate goal was to be normal.

The first thing I tried was church.  I mean, obviously I was being tormented by demons (not!).  I went to many churches, Pentecostal, Catholic, Protestant, and even Jehovah Witness.  I learned something from each.  I spoke in tongues and was baptized in the Holy Spirit, but it was not where I needed to be.  It seemed that churches had too many rules, and the rules seemed to change from church to church.

It was at the end of my church going days that I happened to come across a television program that was discussing meditation.  I was very intrigued and told a friend, from church, about it.  I was immediately presented with “Oh no, stay away from that sort of thing.  That’s from the devil.”  Oh great, I thought to myself, another rule.  The forbidden fruit just proved to be too tempting and I took a bite.

Thus, began the next segment of my spiritual development.  I bought a beginners book on meditation and started to explore my inner world.  The first thing I noticed was that I was communing with the spirit within me instead of something outside of myself; something out there somewhere.

Since then, I have been to many classes and workshops.  I’ve experienced drumming circles, crystal bowl attunements, Reiki healings, and many other modalities.  All of these things are intended to help you on your journey.  However, I’ve come to realize, they all serve to help you to go within.

I’m at a place in my life now, where I understand the most important thing I need to do to remain peaceful.  That is, to be aware.  Learn to listen to that little voice.  Pay attention to the visions that flash before your mind’s eye.  Take notice of the feelings that you are feeling.  Some people call this, being the observer.

Now, why do I call this a blessing and a curse?  It’s a blessing because it’s like having a companion who is always there with you.  However, once you open the door to this awareness, there’s no turning back.  You can try to dumb it down and distract yourself with other things, but the spirit within, will always be whispering in the background.  As, the saying goes, you can run but you can’t hide.

A practice of mine has been to document my revelations.  I’ve kept a journal for as long as I can remember.  My blogging is, in some ways, an extension of my journal.  In the beginning, I would write in my journal either in the morning or at night.  But, with the technology that is available to us these days, I can write in many different places, whenever I want.  It’s like you’re never off.

At any moment I can whip out my phone and document what I’m feeling.  I can snap a photo of a scene that seems inspiring.  I can make notes of some idea that has popped into my head.  If you can’t type at the moment, now with talk to text features, you can speak your ideas into your phone.  I’ve even recorded myself singing on my phone.  The advantages are endless and you can do it anywhere.  I’ve written while sitting in the waiting room at the doctor’s office.  I’ve written while on a road trip.  I’ve stopped short in the middle of Disney to document something.

Awareness has made me the King of my castle, and I like to document all the discoveries I make in my kingdom.  Technology has made it possible for me to do this where ever I’m at.  Unfortunately, this also makes me a slave, as I write from one of the strangest places, sitting on the throne.