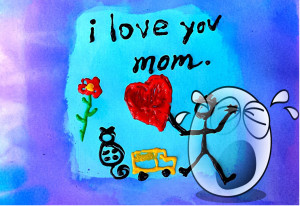 In response to The Daily Prompt By Hand

What’s the best present you’ve ever received that was handmade by the giver, not store-bought? Tell us what made it so special.

It was the hardest year of my life. I must have been stressed to the gills. But quite frankly, I honestly couldn’t say, because I was just numb.

That year, Thanksgiving Dinner was prepared by zombies. When everything was spread out across the table we all sat to enjoy the bounty of a year gone by. Instead of the usual chatter of things to be grateful for, there was a solemn expression on everyone’s face. A forced smile and some laughter would creep in every so often. Dinner was eaten and forgotten, without a moments waste.

Knowing that Christmas was next, I spoke to myself. C’mon, put your big boy boots on. You have to make this as normal as possible. If not for yourself, then for the kids. So that’s what I did. I pounded the pavement, in boots that wanted to slip off, in search of perfect Christmas presents for everyone.

On Christmas morning, I was pleased with myself. I had gotten everyone the most elaborate and expensive presents I could fathom. Perhaps I was trying to compensate for something. I don’t know. But, behind the emptiness in everyone’s eyes, I saw a glimmer of happiness. Job well done.

February was the hardest month of all. You see, that was the month of her birthday. When my Mom was diagnosed with lung cancer the year prior, no one was really prepared for her absence a year later. We all wished her a Happy Birthday and continued with life.

At Eastertime, I had grown used to being the 24-year-old parental guidance of my 9 and 10-year-old brothers. I bought them their Easter baskets, we colored eggs, and I even took them to grandmas. It was tough getting used to things. At times, I felt worn and unappreciated. But I stepped up to the plate and I did what must be done.

Then it happened. Any feelings of being unappreciated were wiped clean. The prompting for this post was “What’s the best present you’ve ever received that was handmade by the giver, not store-bought? Tell us what made it so special.” Well, the best handmade present I had ever received was given to me on the week of Mother’s Day.

It was the end of the school day. I was preparing myself for my brothers’ return home. It seems they came home with so much energy and often times I wasn’t prepared for such enthusiasm. True to form, they came crashing through the door. Only this time, there was a reason. In my youngest brother’s arms was a stack of handmade Mother’s Day cards. His entire class sat down to draw expressions of gratitude and sent me the best present ever. Need I explain why it was so special? I think not.

All I can say is, the floodgates broke wide open.